Delhi, NY (02/25/2019) — SUNY Delhi culinary arts major Daniel Hess of Salisbury Mills, NY, is one of four students in the nation qualified to compete in the annual Student Chef of the Year 2019 competition this summer in Orlando, FL. Hess earned his spot in the finals this Saturday by winning the Northeast Rregional title at Atlantic Cape Community College Academy of Culinary Arts in Atlantic City, NJ.

The Student Chef of the Year competition is sanctioned and organized by the American Culinary Federation (ACF), the largest professional chefs' organization in North America.

"I am bursting with pride over Dan's success this weekend," said Dr. David Brower, Dean of the School of Business and Hospitality Management at SUNY Delhi. "Dan's performance was flawless which was evident in the critique offered by the judges and his gold medal victory. We look forward to supporting Dan as he prepares for Orlando!"

In the competition, all student chefs were required to use the same protein, arctic char, a cold water fish in the salmon family. In his winning dish, Dan Hess showcased arctic char with three different methods of preparation: smoked and cured in a crepe, in a mousseline, and as a filet. The protein was complemented by sautéed vegetables, a celery root stuffed apple, and white wine tarragon butter sauce.

Dan Hess received a near-perfect critique and beat his competitors by a large margin.

"I was nervous, but I felt good about the plate I presented," Dan Hess said. "It was amazing to win. It feels great to know that all my hard work paid off."

"As Dan's coaches, we fully expected the results," said SUNY Delhi Assistant Professor Chef Sean Pehrsson who, alongside Instructor James Margiotta, worked with Dan to create the dish and prepare him for the competition. "Dan is a leader on campus both in and out of the kitchen. He is the benchmark of what the student chef of the year should be."

With his accomplishment, Hess is following in the footsteps of Delhi graduate Julio Chavez who competed in and won both the regional and national competitions last year, earning the title of ACF Student Chef of the Year 2018.

"I'm so proud of my friend Dan and glad to pass the torch on to another SUNY Delhi student," Chavez commented.

Dr. Brower attributes the success of SUNY Delhi's culinary program to its committed faculty, diverse teaching styles, and continued support from the administration.

SUNY Delhi's culinary arts program has long been recognized as one of the best in the country. The program offers students a firm foundation from which to start their careers as culinary professionals. In addition to the core classes, numerous electives are offered, including advanced meat cutting, advanced pastries and confections, culinary competition, and culinary ice sculpting. In the last decade, Delhi students have won more than 500 individual and team medals, including multiple American Culinary Federation (ACF) state, regional, and national titles.

To further increase hands-on learning opportunities for culinary and hospitality students, SUNY Delhi is currently building a state-of-the-art venue for a student-operated pub, restaurant, and event space to be named Bluestone. The construction is estimated to be completed in May 2019. 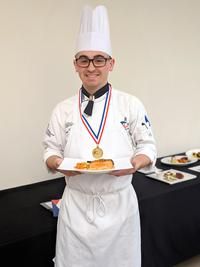